How does vCloud Extender simplify my migration?

Until now, depending on the source hypervisor, VMs had to be exported, converted and then uploaded to the Virtual Datacenter. In the worst case, a complete reinstallation was required and the VM was unavailable for several hours. The vCloud Extender shortens this interruption in less than three minutes and reduces the migration effort in just a few clicks. Seamlessly integrated into the existing on-premises vSphere environment, a Layer 2 VPN is built into the VDC and one or more VMs are migrated as a hot migration during operation. The initial initial synchronization is followed by any number of incremental synchronizations. During the cutover, the on-premises VM is stopped, a final incremental synchronization is performed and resumed in the VDC. The VM in the VDC retains its IP configuration and continues seamlessly through the Layer 2 VPN, or can be manually placed on a separate subnet if needed.

Integrating vCloud Extender with the local environment requires at least VMware vCenter Server 5.5 U3 with vSphere Essentials Plus Kit or higher. At least 100 Mbps of Internet bandwidth is recommended for data transmission.

After the migration and starting of the VMs in the Virtual Datacenter, all operated services are available again. When accessing the Internet, the traffic arrives at the on-premises gateway and is redirected via the Layer 2 VPN to the VM in the Virtual Datacenter. This leads to a double burden of on-premise internet connection. The following simplified architecture shows the problem. 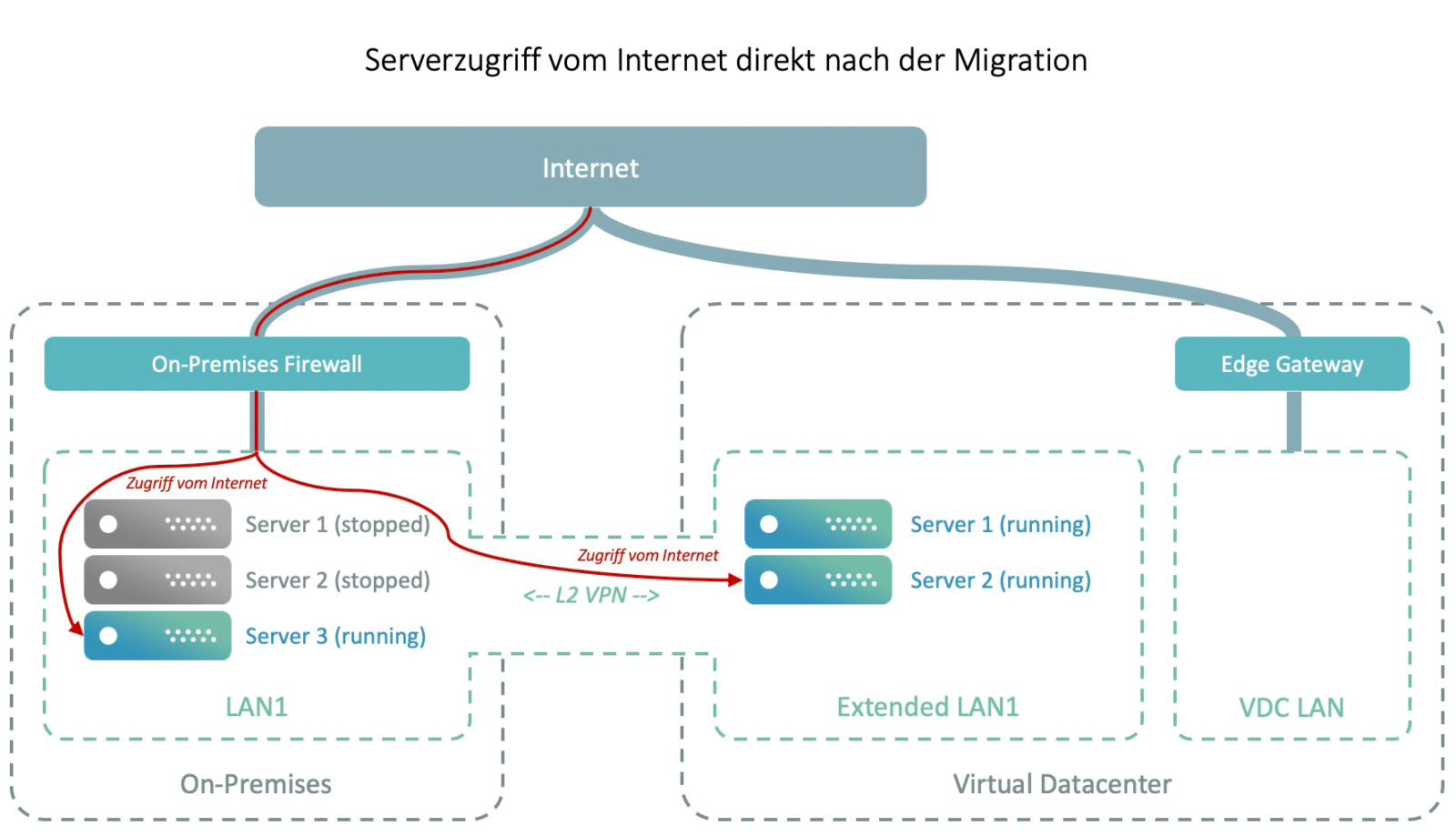 After the migration, the access from the Internet to server 2 via the on-premises network, because this is only possible via the Layer-2 VPN. The Extended LAN1 can not be connected directly to the Edge Gateway in the VDC, which creates a double load on the on-premises Internet connection with every access.

Because the edge gateway in the VDC can not be directly connected to the extended LAN1, the dependency on the on-premises infrastructure persists, which is desirable in the fewest cases. To solve the problem, the migrated VMs must be moved to a separate VDC LAN, which also results in an adaptation of the IP configuration. 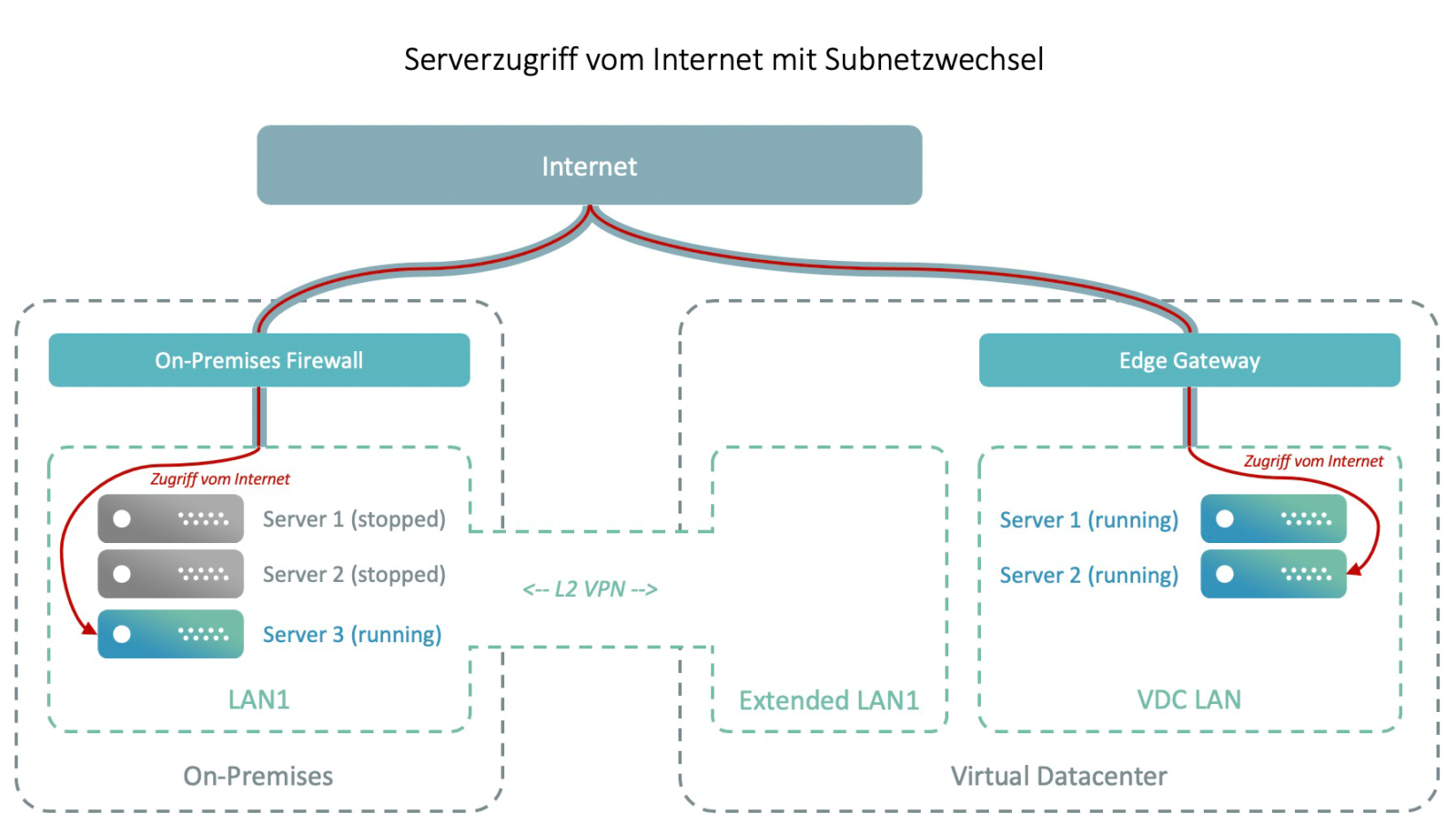 Moving the migrated VMs to a separate VDC LAN results in a change in IP configuration, while maintaining complete independence from the on-premise infrastructure. LAN1 and VDC LAN can be connected to an IPSec VPN.

Access to on-premise systems continues to be via the on-premise Internet connection and access to the migrated VMs directly over the VDC Internet. If, for some reason, it is not possible to move the VMs to a separate VDC subnet, but still achieve independence, there is a workaround with a virtual firewall appliance between Extended LAN1 and VDC LAN. 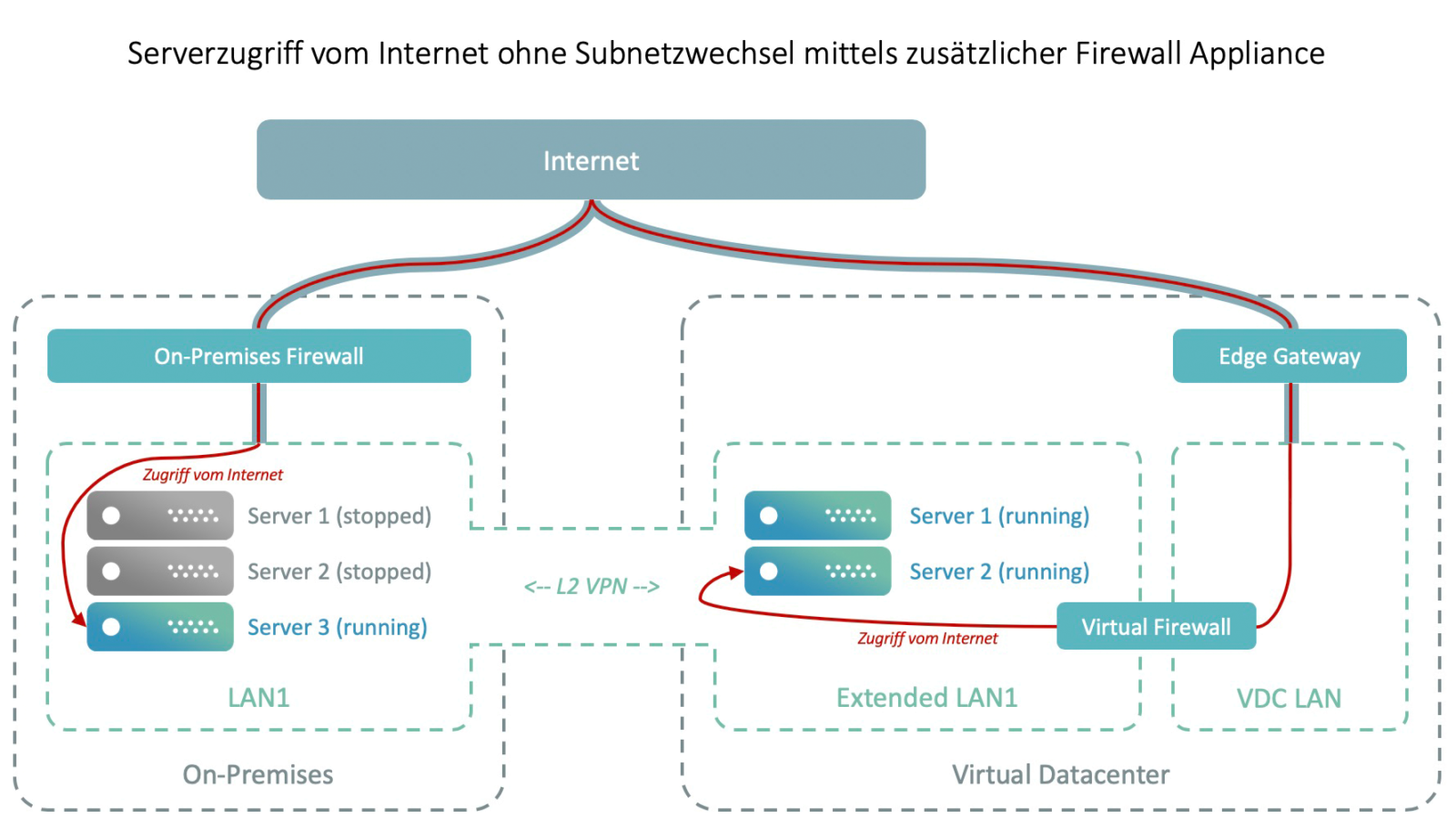 The Extended LAN1 can not connect to the Layer 2 VPN and the VDC Edge Gateway at the same time. However, using any virtual firewall appliance, it is still possible to realize the concept of a second gateway in the Extended LAN1. The default gateways of the VMs must point to the virtual firewall, thus achieving the independence of the on-premises infrastructure.

With the virtual firewall as the second gateway in the Extended LAN1 and the adaptation of the default gateway of the migrated VMs, the decoupling of the on-premises infrastructure succeeds. From now on, access to the Internet on VDC systems will be via the VDC’s Internet connection.

The vCloud Extender is a much-anticipated tool for migrating on-premise workloads into Virtual Datacenter and for deploying hybrid architectures. The handling is simple, the migration process very slim and the downtime minimal. There’s nothing to stop you from migrating to the Virtual Datacenter.

« Back to the Blog

Our product assistant helps you to find the right products.

Do you have in-house IT personnel or know-how?

Would you like to buy entire servers or just specific services?

Is high availability or a low price more important to you?

We can only achieve high availability with virtual servers. How many VMs do you want to operate?

Up to three VM More than three VM

Cluster VPS are virtual servers with extremely high availability, which continue to run without interruption even if our server hardware fails.

Do your VMs need to be separated from other customers only logically (IaaS) or even physically (dedicated Private Cloud)?

Our highly available Private Cloud offers simple, web-based management with the flexibility and security of an on-premises environment.

Do you prefer dedicated bare metal servers or virtual servers?

Rent dedicated physical server hardware that is entirely dedicated to you and completely free to manage.

Cost-effective servers for standard applications without special requirements with SSD or HDD storage.

Which service are you looking for?

Would you like to outsource your complete IT and have it managed by us?

With My Workplace 2.0, you store all your data and applications in our secure Swiss data centers and access them from anywhere.